I’m back but I’m not sticking around.

This will just be a short visit, I’m sure, and then I’ll be on my way.

By the way, I never thanked you for the last time you helped me out. I really appreciate you letting me stay for those couple of weeks when Osteoarthritis was giving me a hard time. I don’t know what I would have done without you.

Thank you for giving me a comfortable place to rest and a refuge that enabled me to sleep without allowing Osteoarthritis to hang around and bully me.

I suppose you are wondering why you haven’t heard from me lately. Well, everything has been going well and I have been busy doing other things. You know how it goes.

I’m sorry, what did you say? Oh, you ask what brought me back?

Well, it’s springtime, you know. It’s my favorite time of year. Everything is blooming and it’s so beautiful outside. The weather is perfect! It’s comfortable to be outside without a jacket but not so hot that it makes me sweat.

Since I didn’t have to work, I thought it would be nice to go for a walk. There’s that beautiful trail just a few miles away; you know that one with farms on each side? I used to love to go there early in the morning in the summer when I had to get there early before the sun made it miserably hot. Early mornings were the best anyway because that’s when I would see the most wildlife.

One day last year I saw several deer and a buck, a bald eagle, a blue heron, and another sea bird that I don’t know the name of. Maybe I saw a turtle or two on the same day. I don’t remember. It was a beautiful morning though, and I felt like I had the whole place to myself. I enjoyed standing on the bridge, listening to the quiet and admiring those giant white flowers that border the stream. 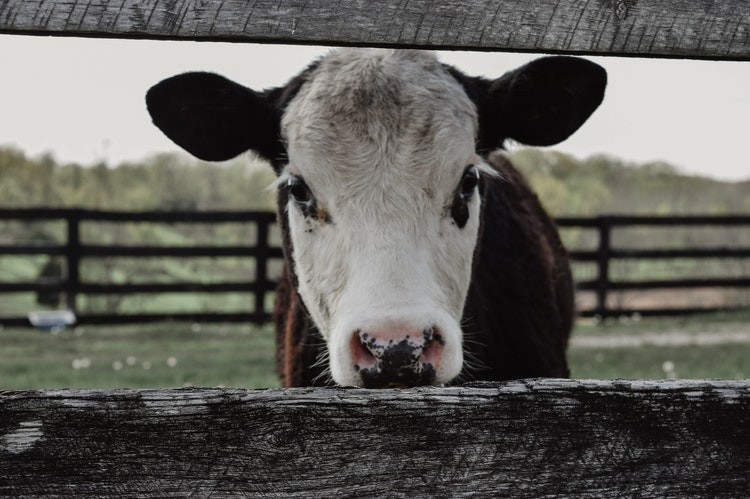 Today was different. It was nice but it’s a weekend and I went in the afternoon so there were more people there. It’s a popular place for walking dogs and the woodland creatures and water birds tend to hide when the dogs are out.

There were plenty of cows to admire! I really love cows. They always seem to be at peace with the world. When I have plenty of time to spare, I like to stand next to the fence at a cow pasture and wait. If I linger long enough, the cows will come over to the fence so we can get a better look at each other. That’s all we do most of the time–just stand and gawk. Occasionally, I might say a few words or they might voice a greeting but most of the time we just welcome each other in silence and then go our separate ways.

It was overcast today and I might have enjoyed taking some pictures but you know how I am. I like to keep my hands free. With my stretchy phone belt, my hat, water bottle, and outer shirt, I had enough to carry.

Carrying stuff is what made me come running back to you. Even though I had a very small water bottle and carried it in the hat which I had very carefully positioned over my shoulder, I ended up stressing my neck and shoulder which triggered one of those headaches I used to have every day. It has been so long since I have felt that way that I had nearly forgotten what it felt like.

If I had not had to concentrate so hard on walking, I would have been fine. It’s hard to believe that I used to walk three to five miles on that trail almost every day. Today, I didn’t even make it a mile in before I had to turn around and that was after taking breaks on two benches along the way.

Where did those hills come from? I don’t remember there being more than one hill and you know how hard it is for me to walk up hills. Maybe I should have taken Gnarly-stick but since I have been feeling so good for the past couple of weeks, it really didn’t seem necessary.

It was slow moving. Man, hills have gotten hard! As soon as I took a few steps upward, my hip started to falter. My leg got that weird, “I’m going to leave you alone now” feeling. By the time I made it to the top, I was limping and looking for some other stick friend to stay with me.

The next hill was better. I’m getting smart. I took that second hill like a flight of stairs. Left foot forward, right foot drag, left foot forward, right foot drag. That was much better and I was glad there wasn’t anyone around to gawk at me right then. It was bad enough that I had to be there. By the time I hit the third hill, I had my technique down fairly well. The only problem was that I was having to concentrate so hard on walking that I wasn’t enjoying the scenery.

It felt good to rest on the hard bench in the woods. I enjoyed looking out over the water and I could see the bridge and the next bench up ahead. I wondered if I could get that far. I knew the route well and that bench was only three-fourths of a mile in on the trail. Once I got there, I would have an additional hill to climb heading out but it is one of my favorite spots so I decided to go for it. 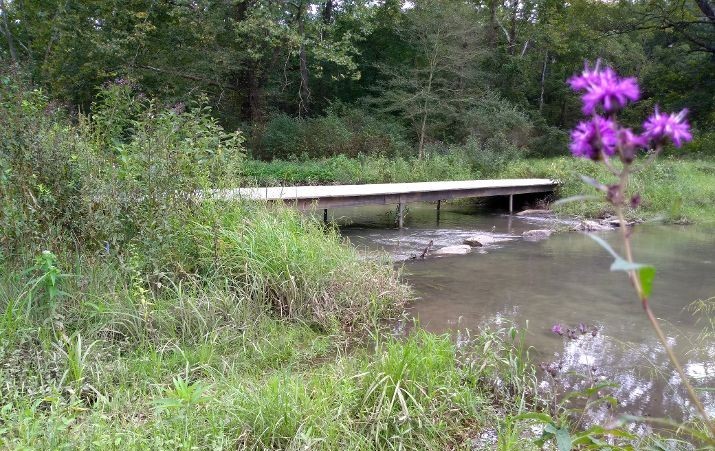 Another rest on the bench felt good. Heading back was much easier now that I had a technique for making it up the hills, albeit it was slow moving. My leg had stopped threatening to leave me and my hip was loosening up. All that concentration on walking was not helping with the headache at all.

Whatever happened to all that stamina I used to have? I remember when I used to walk more regularly that I felt like I walked slower than most people but had the stamina to outdo most. My energy deflated more with every step.

It felt like hours had gone by when I finally reached the car. Maybe they had; I hadn’t looked at the time.

I came home exhausted and hoped that the phone wouldn’t ring and that no one else would be there. I just didn’t have the energy to handle people-ing right then.

As soon as I had my shoes off and mail sorted, I made myself a giant bowl of chocolate ice cream. Notice I didn’t say “dished up”. Chocolate ice cream is super easy to make if you have frozen bananas, which I make a point of having. Frozen bananas blended with cocoa powder and a little almond milk makes a nice treat. Throw some mixed nuts on top and you have dinner.

After that, I decided to visit you, Tylenol. Guess what? While I was sitting here telling you all about my problems, the pain went away. See? I’m getting stronger. I may look defeated but I won! Not only did I learn a new trick about getting up hills, but I found out that sometimes I can manage things on my own after all. I just have to be careful.

I guess I won’t be needing you, Tylenol, but thanks for being here just the same. Well, I guess I had better be going.

See you next time!

By the way, it’s okay that I wasn’t able to admire the scenery the way I like to. I have walked that walk enough times that the scenery is fixed in my mind. After my shower, I’m going to pull it out and enjoy it while I enjoy a cup of my favorite coffee.

2 thoughts on “Dear Tylenol, I’m back but I’m not sticking around.”

As an Amazon Associate, I earn from qualifying purchases.

Learn how to set up a blog or website